It was around 9 a.m. when we left our camp at Tanakita camping ground, located in the beautiful countryside of Sukabumi's Cisaat district, adjacent to Gunung Gede Pangrango National Park. 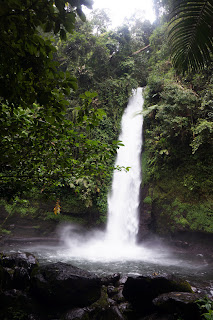 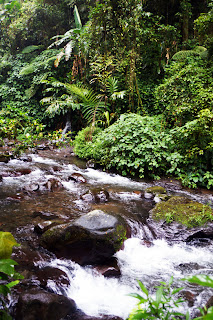 The sun hid behind the cloudy morning sky as we headed to Situ Gunung Park (still part of Gunung Gede Pangrango National Park) where we hoped to see the locally-famous Curug Sawer waterfall.
It only took 10 minutes to reach the park’s entrance but our guide, Alex, said it was a 1.8-kilometer hike to reach the waterfall from the entrance.
The trail was easy to traverse at first as it was still relatively flat, but then we came across a steep rocky path with many turns, and muddy paths that wound past bushes and trees.
As we traveled deeper into the forest, the sounds of nature became louder, but our ears were strangely filled with a sense of quietness at the same time. The atmosphere excited me.
Alex told us one of his fellow guides had encountered a leopard during a trip further inside the national park’s forest, but his friend was lucky enough not to be harmed because he had managed to maintain calm and collected.
For us, Alex said if we got lucky we might see the tailless monkey, known locally as Owa Jawa.
Our journey took an unexpected turn when one of us got bitten by a leech. Luckily for us, my friend was calm - he even asked me to take picture before he pulled the creature off his skin.
I just concentrated my mind on the beauty of our surroundings as we passed tiny waterfalls. Then, the rumbling sound of a bigger waterfall dismissed any negativity, and soon we were able to see our reward: the amazing sight of Curug Sawer.
The water there felt icy cold and was so clear. The towering Curug Sawer is said to be about 25-30 meters in height.
Our guide said some extreme sport lovers liked to canoe from the top of the waterfall downward. He also said that deeper in the forest was Curug Kembar, another waterfall with a height of up to 80 meters, with views that were even more stunning. 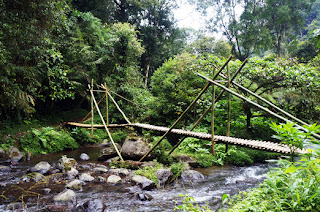 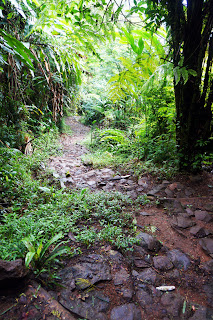 However, due to the gloomy weather, we were unable to spot the rainbows that were said to regularly appear in the morning. Nevertheless, despite not seeing any Owa Jawa or rainbows, seeing and feeling the waterfall itself was amazing.
(Jakpost) (Photo by Icha Rahmanti)
Posted by Sukabumi Tourism at 5:59 PM No comments:

Mount Gede Pangrango National Park is a national park in West Java, Indonesia. The park is centred on two volcanoes—Mount Gede and Mount Pangrango— and is 150 km² in area.

It evolved from already existing conservation areas, such as Cibodas Botanical Gardens, Cimungkat Nature Reseve, Situgunung Recreational Park and Mount Gede Pangrango Nature Reserve, and has been the site of important biological and conservation research over the last century. In 1977 UNESCO declared it part of the World Network of Biosphere Reserves.

Mount Gede (2,958 m) and Pangrango (3,019 m) are twin volcanoes. The two summits are connected by a high saddle known as Kandang Badak (2,400 m). The mountain slopes are very steep and are cut into rapidly flowing stream, which carve deep valleys and long ridges.

Lower and upper montane and subalpine forests are within the park and have been well studied. To the north of Mount Gede is a field of Javanese Edelweiss (Anaphalis javanica). The park contains a large number of species known to occur only within its boundaries, however, this may be a result of the disproportionate amount of research over many years.

Gunung Gede-Pangrango is inhabited by 251 of the 450 bird species found in Java. Among these are endangered species like the Javan Hawk-eagle and the Javan Scops Owl.

Among the endangered mammal species in the Park there are several primates such as the Silvery Gibbon, Javan Surili and Javan Lutung. Other mammals include Leopard, Leopard Cat, Indian Muntjac, Java Mouse-deer, Dhole, Malayan Porcupine, Sunda Stink Badger, and Yellow-throated Marten.

Visitors usually enter the park by one of the four gates of the park: the Cibodas, Gunung Putri, and Selabintana gates, all give access to the peaks; the Situ Gunung gate gives entrance to a lake area set aside mainly for family-style recreation. Cibodas gate is the most popular entrance gate and is the site of the park's headquarters. From Jakarta, the area is two hours drive, usually via Cibodas Botanical Gardens.

(wikipedia)
Posted by Sukabumi Tourism at 5:23 PM No comments: